st1\:*{behavior:url(#ieooui) } <![endif]–>I remember it like it was yesterday, even though it took place sometime around 6thor 7th grade.  On a blistering hot summer day in Northern California, I found myself floating alone in the middle the lake.  Strapped to my torso was my life jacket—nothing out of the ordinary there.  But strapped to feet, was one solid, flat piece of fiberglass and plastic they refer to as a wakeboard.  In my hands—that were shaking with nerves and adrenalin—I held a triangle-shaped handle at the end of a 65 or 70 foot rope that was attached to a boat designed to go fast and create a big wake behind it.  In that boat sat my older brother—who is five years older than me (and sometimes six, depending on the date)—with three or four of his closest and coolest high school friends.

As I tried to run through every word of advice and instruction that I had just received in the moments before I jumped from the boat into the lake, it was as if time just froze.  It was one of those moments where you know something big is about to happen and the entire soundtrack of everything around you goes silent so all you can hear is the sound of your own racing heartbeat (thump, thump—thump, thump).
Here I was.  My moment had come.  It was my first time wakeboarding, and I was not going to embarrass my older brother in front of his friends. 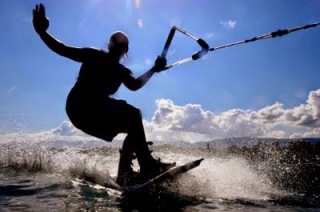 When I felt like I had everything in the right place and was ready to go, I took a deep breath, and I yelled the customary, “Hit it!” that signals the driver of the boat to push the throttle.
And when he did, the rope immediately tightened and I was quickly pulled up out of my sitting position in the water.
This is also one of the moments that when they portray it in a movie it’s in slow motion.  The only problem was, as soon as the boat pulled me from my sitting position, and I could picture everyone beginning to clap and cheer in slow motion with the volume of heroic music rising, that solid piece of fiberglass and plastic that they call a wakeboard, the one that was strapped to my feet, sunk below the surface of the water, bringing the bottom-half of my body to a complete stop while the top-half of my body continued to rise and propel forward and then… immediately downward.  The rope snapped out of my hands and I face-planted with a loud smack on the surface of the water.
I was humiliated.
It didn’t matter that everyone had warned me how difficult it was to learn how to wakeboard.  This was my moment.  I was going to prove to my older brother, in the presence of his cool friends, how cool I was, even though I was five (and sometimes six) years younger.
But I failed.
When I finally collected myself, shook the water out of my nose and ears, holding back the tears of frustration and embarrassment, I looked up at the boat that had circled around to give me a second chance.  And I’ll never forget what I saw next.
My cool, older brother, who had strapped on a life jacket of his own, jumped off the boat and began to swim towards me.  Part of me assumed that he was just going to ask me to swim back to the boat so he could show me how’s it really done, but instead he said, “All right man, you got this.  I’m going to sit here in the water with you for as long as it takes you to get up.”
And for the next several attempts and face-plants, he sat there with me, encouraging me and giving me helpful pointers as I got closer and closer, until finally, I stood up and rode that wakeboard, feeling like I had just conquered the world.
He didn’t have to stoop to my level; he chose to.  In the presence of his cool friends, he put his own reputation to the side, jumped off the boat and joined me in the water in order to encourage me and teach me.
Now, don’t get me wrong, my brother didn’t alwaysdo things this cool.  He was a good guy—and he still is—but we were still brothers.  But on this day, in this moment, he went the extra mile to make sure I had the chance to succeed.
We’ve all had times in our life when we’ve felt like we’re floating alone in a lake with the weight of the world on our shoulders.  We’ve all experienced what it feels like to face plant and fail.
One of the greatest gifts that God has given us is the Church.  It’s in these hard times in life that the body of Christ is called to thrive.  Each one of us has the opportunity to strap on our life jacket and jump off the boat to join those around us in the water.
Who is it that God has put in your path?  Who is God calling you to join in the water? Jump off your boat of comfort and swim straight toward that person, saying, “All right man, you got this.  I’m going to sit here in the water with you for as long as it takes you to get up.”
You never know when the roles will be reversed.  But when they are, and when the body of Christ is operating as it was designed, you can bet that when you look up, someone will be joining you in the water, going the extra mile to make sure you have the chance to succeed.